Bishop Kevin C. Rhoades is the son of the late Charles and Mary Rhoades, and the brother of Charles Rhoades and Robin McCracken. He was born November 26, 1957, in Mahanoy City, Pennsylvania, located in Schuylkill County in the Diocese of Allentown, and baptized at Saint Canicus Church there. He grew up in Lebanon, PA, where he was a member of Assumption of the Blessed Virgin Mary Parish. He attended the former Saint Mary’s School in Lebanon and graduated from Lebanon Catholic High School in 1975.

He enrolled at Mount Saint Mary’s College (now University) in Emmitsburg, Maryland, in the fall of 1975, and studied there for two years. In 1977, he entered Saint Charles Borromeo Seminary in Overbrook, Pennsylvania, and earned a bachelors degree in philosophy there in 1979. He did his theological studies at the North American College and the Pontifical Gregorian University, both in Rome, from 1979-1983. He also studied Spanish at the University of Salamanca in Spain during the summer of 1982.

Pictured: The future Bishop Rhoades at his Confirmation

Cardinal Terence Cooke ordained Bishop Rhoades a deacon at Saint Peter’s Basilica in Vatican City in 1982. He was ordained a priest of the Harrisburg Diocese on July 9, 1983, by then-Auxiliary Bishop William Keeler (pictured). The ceremony took place at Assumption of the Blessed Virgin Mary Church in Lebanon, and was the first ordination to take place in the county. His first assignment in the diocese was as parochial vicar at Saint Patrick Parish in York from 1983-1985. During this time, he also ministered in the Spanish-speaking apostolates at Cristo Salvador Parish in York and Cristo Rey Mission in Bendersville. In 1985, he returned to the Gregorian University in Rome, where he earned advanced degrees in dogmatic theology and canon law.

In 1988, he came back to the Harrisburg Diocese to serve as assistant chancellor under then-Bishop Keeler. During this time, he also ministered as the director of the Spanish apostolate in Dauphin, Cumberland and Perry counties, and as administrator pro-tem of Our Lady of Guadalupe Parish in Lebanon.

Bishop Rhoades was appointed pastor of Saint Francis of Assisi Parish, Harrisburg, in 1990. He served there until 1995, when he accepted a full-time faculty position with Mount Saint Mary’s Seminary. While there, he taught courses in systematic theology, canon law and Hispanic ministry.

In March 1997, he was named rector of Mount Saint Mary’s Seminary, a role he fulfilled until his appointment by Pope John Paul II as Bishop of the Diocese of Harrisburg on October 14, 2004.

Kevin Rhoades was ordained a bishop on December 9, 2004, by Cardinal Justin Rigali, Archbishop of Philadelphia. On that date, he began his ministry as Bishop of Harrisburg, a diocese that encompasses 15 counties of south-central Pennsylvania and which includes more than 250,000 Catholics.

Bishop Rhoades was appointed the Ninth Bishop of the Diocese of Fort Wayne – South Bend on November 14, 2009, by Pope Benedict XVI, and installed on January 13, 2010, in the Cathedral of the Immaculate Conception in Fort Wayne. (Read more.)

The coat of arms for Bishop Kevin C. Rhoades, ninth bishop of the Diocese of Fort Wayne–South Bend, combines diocesan and personal elements.

The crescent moon at the top left of the shield symbolizes the Blessed Virgin, the patroness of the diocese and the cathedral under the title of her Immaculate Conception; the battlement, or rampart, recalling the historic foundation of the See City of Fort Wayne; and the three crosses of equal size representing the Most Blessed Trinity, the basic mystery of our faith. The lower portion of the left side includes heraldic reference to the city and area of South Bend. The lily is a traditional symbol of Saint Joseph, whose name identifies the county of which South Bend is the seat and also the river which flows through it. The use of the “fleur de lis,” the French form of the lily, recalls the pioneer settlement of the territory by the French and the early missionary labors of French priests, particularly Holy Cross Father Edward Sorin and his companions who founded the University of Notre Dame. 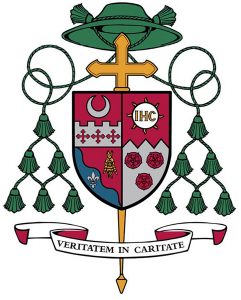 The figure of the six-winged angel is one of the familiar symbols of the four Evangelists, in this instance of Saint Matthew, patron of the co-cathedral in South Bend. The curving line between the lower two sections of the shield represents the Saint Joseph River, the south bend of which gave the city its name. It is interesting to note that such curved lines are known in heraldry as “bends.”

The top right of the shield, the most prominent field in Bishop Rhoades’ armorial achievement, is dedicated to the Holy Eucharist and commemorates Pope John Paul II’s nomination of the ecclesial year (2004-2005) throughout the Universal Church as the Year of the Eucharist. Bishop Rhoades, whose episcopal ordination took place during the eucharistic year, particularly desired to emphasize that “the Church draws her life from the Eucharist,” as Pope John Paul II states in the opening sentence of his encyclical, “Ecclesia de Eucharistia.” Bishop Rhoades also wished to highlight the centrality of the Holy Eucharist in the life and ministry of priests and bishops as the source of pastoral charity and nourishment for self-giving service in imitation of Jesus’ gift of self re-presented in the eucharistic sacrifice.

The top portion of the bishop’s shield represents the gift of Christ’s body and blood in the holy Eucharist. The deepest heraldic red background commemorates the blood of Christ poured out for us on the cross and made present in the eucharistic banquet. The Sacred Host represents the body of Christ truly present in the Eucharist and is irradiated with the golden rays of the sun as seen from behind, signifying that Jesus is the “Light of the World.”

The Host is uniquely inscribed with a cipher, or monogram, bearing the initials “IHC,” the first three letters of the Greek word “Jesus” (IHCOYC). The use of Greek, the original language of the New Testament and the early language of the Christian Church, honors the bishop’s maternal Greek heritage.

Bishop Rhoades likewise wished to honor the Mother of God and to invoke her maternal intercession in the mission of the new evangelization to which Pope John Paul II has committed the Church at the beginning of the third millennium. In so doing, he selected the apparition of the Virgin of Guadalupe on Tepeyac Hill in the present-day Mexico City. There, the Virgin Mary instructed the humble peasant Juan Diego, on whose feast day Kevin C. Rhoades was consecrated to the episcopacy, to return to his own local bishop to present a sign so that all in the Church could believe her message to him.

When Juan Diego opened his tilma, or humble peasant’s poncho, in front of his bishop, the roses that the lady had instructed Juan Diego to collect fell to the ground in a shower of brilliant color and sweet fragrance, even though at that time it was deep in the winter season when nothing in nature was in bloom. At that instant, the glorious image of the Mother of God appeared on his tilma. And so all came to believe. This appearance of Mary had a decisive effect on the evangelization of America and so Our Lady of Guadalupe is invoked today as the patroness of all America and the Star of the first and new evangelization. The lowly peasant Juan Diego has himself been raised to the altar of sainthood.

The bottom field of the personal arms symbolically depicts the opening of Juan Diego’s tilma, in the same confident belief in the Blessed Virgin embraced long ago by the humble Mexican peasant, with three roses on a silver field. Bishop Rhoades has selected the Rosa Mystica, the red heraldic rose that centuries ago was set aside as one of the heraldic emblems for Jesus’ Mother. The simple silver background of the lower half of his arms represents both spiritual purity and priesthood and the humble cloth of Juan Diego’s tilma. Dividing the two separate fields of the arms is a device known in the heraldic science as dancetty.

It is a device commonly employed in heraldry to depict mountains. For Bishop Rhoades, this division device symbolically represents four specific mountain ranges that will forever remain close to his heart: the mountains surrounding his home region of Mahanoy City, PA.; the imposing Appenines that frame the Eternal City where the bishop prepared for the priesthood; the mountains cradling his beloved Mount Saint Mary’s Seminary in Emmitsburg, MD., from whence as rector Bishop Rhoades came to Harrisburg; and the verdant peaks that are the imposing terrain of the See of Harrisburg.

Surmounting the episcopal shield is the Pilgrim’s Hat, the heraldic emblem for all prelates and priests of the Latin Rite of the Roman Catholic Church. For the rank of bishop, both residential and titular, the Pilgrim’s Hat is worked in deep green, the true color of the Office of Bishop. For bishops, there are six tassels suspended on either side of the hat in a pyramidal style. The hat is properly known in the Church as the galero and the tassel takes the name fiocchio. These, too, are worked in green for the Office of Bishop. Behind Bishop Rhoades’ coat of arms is the episcopal cross. For the rank of bishop, this cross has only one transverse arm. The cross may be jeweled or depicted as plain, as in the case of the cross of Bishop Rhoades’ heraldic achievement, and most resembles the processional cross used at Mass.

In heraldry, a motto has been both a personal philosophy of life as well as a family dictum, sometimes even a cry for battle. But in Church heraldry, the personal motto of a prelate has always been intended to represent his personal spirituality and theologically-based philosophy of life and is most frequently grounded in sacred Scripture. Bishop Rhoades has selected the phrase “VERITATEM IN CARITATE” that translates into English as “Truth in Charity.”

This motto, or personal philosophy, served him well in his leadership as rector of Mount Saint Mary’s Seminary where he steadfastly encouraged future priests to always be faithful in proclaiming and living the truth of the Gospel in charity. The words of this motto are found in sacred Scripture in Saint Paul’s letter to the Ephesians, “let us proclaim the truth in charity and grow to the full maturity of Christ the head.” (4:15). The Second Vatican Council, in its teaching on the Church as the body of Christ, refers to this scriptural passage saying, “Christ continually provides in his body, that is, in the Church, for gifts of ministries through which, by his power, we serve each other unto salvation so that, carrying out the truth in charity, we may through all things grow unto him who is our head.” – “Lumen Gentium” 7.